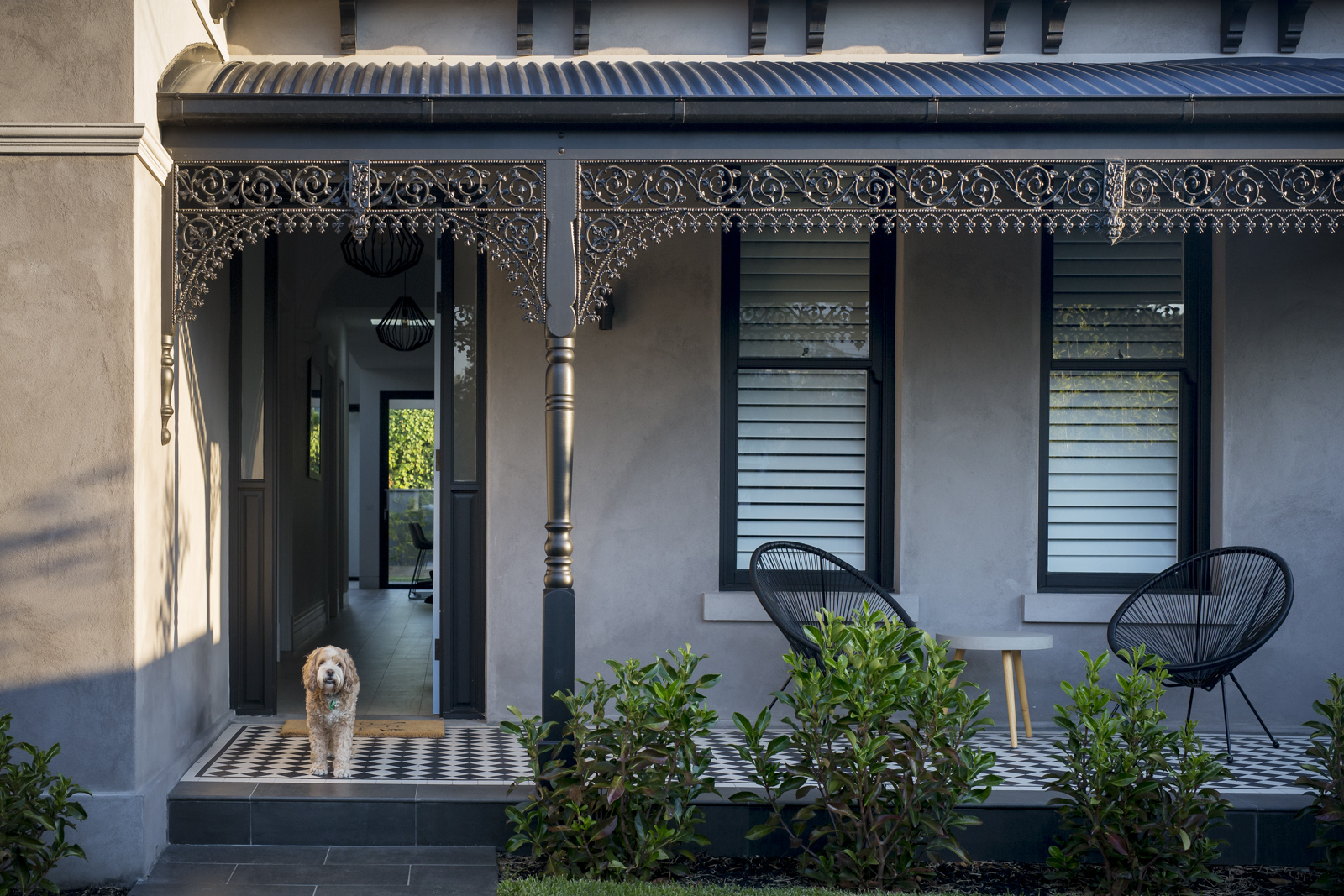 When it comes to owning and living in a home, many of us dream of finding a diamond in the rough and tackling the giant project of giving it a renovation that will tailor it perfectly to our needs. For Steph Hegerty and her husband, this dream came true when they stumbled upon a century-old Victorian home in Elsternwick that was ripe for renovating.
“My husband and I had always wanted to renovate a Victorian or Edwardian home and when we saw this house in Elsternwick we saw the potential to bringing these back to life,” says Steph, “We wanted to create a modern home that had the warmth and charm of a period home.”
The end result is a lovingly restored contemporary home that pays homage to the house’s past, melding traditional details with a classic contemporary aesthetic. 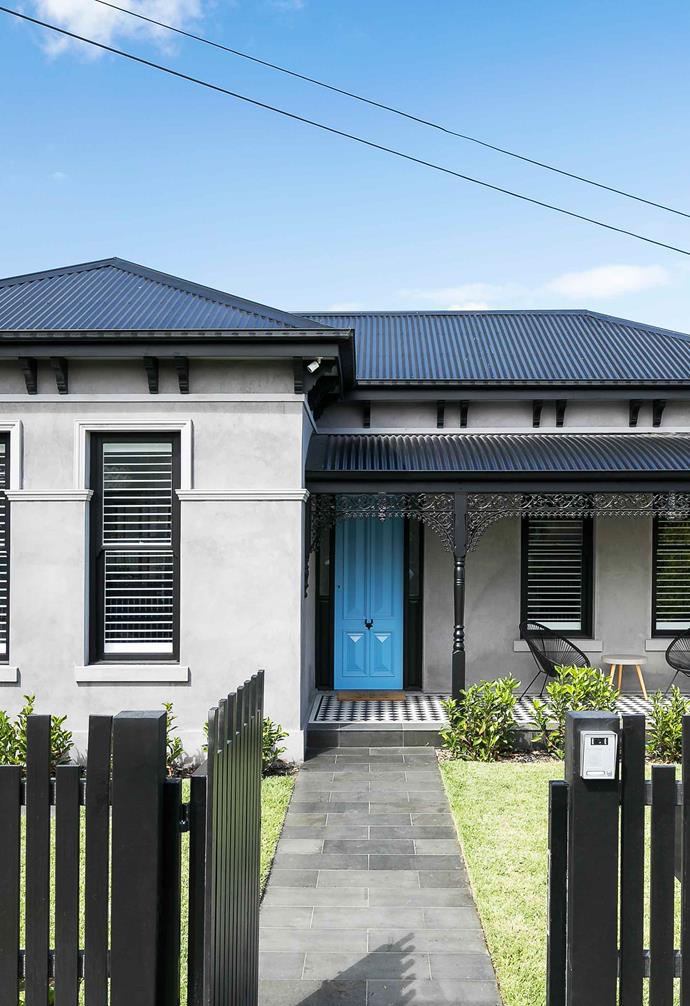 “The original house was built around 1910. It was very hard to see its Victorian features as the home had been badly renovated in the 70’s, and most of its charm had been removed,” explains Steph, “It looked pretty dire, to be honest.”

Facade One of the core focuses of the renovation was restoring and re-introducing traditional details to the home. The grey rendered facade pairs beautifully with dark fencing and roofing, and a vibrant blue front door elevates the home’s kerb appeal.

The couple focused on aiming to, “reinstate as many Victorian features as possible in the front part of the house, by bringing back large profile skirts, arcs, cornices, ceiling roses, On the exterior facade we added a bullnose veranda, lacework, window mouldings, timber sash windows, and more.”

Front step The playful black and white patterned tiles work seamlessly with the monochrome exterior palette. A seating area on the porch provides the perfect lookout for when children play in the front yard.

Resilience is key when it comes to tackling a large-scale renovation, and this was no exception. “The hallway arch that we both loved was in a very bad state as it had been repainted a million times, but luckily the supplier I had been recommended for all of our ornamental plasterwork, had the very same profile as our original hallway arch. We found out that they had made our original one over 100 years ago, as no supplier has exactly the same profile, which was really exciting,” says Steph.

Hallway The restored archway makes a dramatic statement in the hallway, working seamlessly with the traditional features the reno rookies were aiming to reinstate.

The renovation process started for Steph with a deep dive through Pinterest’s extensive archives of inspiration, and very quickly a common style emerged, with Steph remarking that, “it was reassuring to see a real theme running through it: a monochromatic palette with light floorboards and pops of colour.”

Kitchen In the kitchen the monochromatic look comes to the forefront with dark cabinetry popping against the mostly white interior of the rest of the home. Grey barstools with a simple silhouette softens the kitchen space, and a trio of ceramic pendant lights hang above the kitchen island.

The next step for the pair was to get in touch with the pros: “We also sought some guidance from a super talented friend of ours, Sally from Sally Caroline Interior Atelier Melbourne on some of our ideas. She gave us the confidence we needed to be bold with our interiors and finishes decisions.”

Kitchen A mirrored splashback helps bounce light around the kitchen space while also giving the impression that the open-plan living and dining area is bigger than it is. Built-in stainless-steel appliances provide a sharp contrast to the black cabinetry.

“In terms of the architectural process, we had a really solid idea of what we wanted the floor plan to be, so we approached the team at Sketch Building Design for the brief,” continues Steph. “They helped bring it to life and added all the bells and whistles that only an architect could have done.”

Open plan The open-plan living and dining area is divided into subtle zones, with the inset-wall of the living area contrasting with the black cabinetry in the dining room portion. A central structure housing a fire place lies in between.

“Modern homes can sometimes feel a bit soulless, so reinstated large skirting boards and architraves, ceiling roses and cornices, because these features would be what would forever make the house feel like it had history, and stories to tell,” says Steph.

Master bedroom Skirting and cornices were reinstalled throughout the home, restoring a refined and traditional aesthetic to the house. In this bedroom twin artworks introduce colour into the space which is echoed in the walk-in wardrobe.

The biggest issues Steph came across when renovating was the uncertainty of knowing what foundations they had to work with. Steph says, “the brickwork structure of the house was as solid as a rock (being on bluestone footings), but we ended up having to replace the trusses, which was quite a hefty variation as they were rotting. We also didn’t know the state of the plaster in the front half of the house until we stripped all of the paint off the walls. It was terrible, so there was a lot of restoration needed, which was another unforeseen variation.

Walk-in wardrobe Partitioned from the rest of the master bedroom by a black framed glass screen and door, the blue artwork in the bedroom is echoed in the soft blue cabinetry in the wardrobe.

“What saved us during the unforced restorations was our contingency budget, so put away more than you think you may need!. Particularly if you’re renovating an older period home. I would also suggest that if you have your heart set on a certain feature that is on the more expensive side, like engineered boards, stone bench tops etc, budget for it and be willing to compromise on something else,” she continues.

Bathroom The monochrome palette continues in the bathroom with a black-framed glass shower screen complementing the black tapware and trim on the mirror. Large format grey tiles contrast with a white freestanding bathtub and vanity.

So what’s next for Steph and her family? “We’d love to tackle another renovation” she says, “We’ve actually just put this home up on NOKK, which is kind of like a LinkedIn for homes, so hopefully once we’ve sold it, we’ll be able to find another diamond in the rough!”